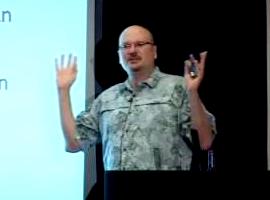 The talk will have two parts. The first will be summarized knowledge from successful old programmers and the people who work with them. The second will look at how, specifically, programmers decline, and it will contrast classical views about what programmers do with some of the claims of ecological (or embodied) cognitive science. If we consider ourselves animals acting in a world, rather than “brains in a vat” cogitating away, we can learn how to compensate for the inevitable.