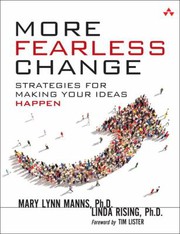 More Fearless Change is an update to Fearless Change, ten years on from the publication of this catalogue of patterns for introducing organisational change (reviewed in C Vu 17.1). The original is a title that I have often seen recommended or referenced, but never actually read. It consists of 48 patterns covering strategies to kick-start and sustain change in a wide range of situations. The new book is neither a new edition nor a straight follow-up, instead it is more akin to the deluxe edition of a classic album, repackaged with bonus material.

The patterns from the first book are presented in their original form, and in most cases accompanied by new sections with additional insights – these range from brief comments to more in-depth sections covering a full page or two. The patterns themselves are typically three or four pages long, following a well-structured format which allows the narrative to be presented clearly and concisely.

In addition to the original set, there are 15 new patterns. These patterns have been refined in PLoP conferences – I’m not sure if this was the case for the originals – and as a first time reader the old and new fit together well.

The book has three parts, with the main part containing the patterns preceded by two introductory sections. A overview of five short chapters summarises the new patterns in a logical grouping: strategize, share information and seek help, inspire others, and target resistance. This is a useful way of introducing the patterns and how they relate to each other, which would have been nice to see extended to cover the full catalogue. This is followed by two brief stories intended to give the reader some ideas for using the patterns. This section doesn’t work so well: the stories are too short to be of much value, and while the first is a real case study, the second is fictitious.

No matter, the bulk of the text is devoted to the patterns themselves, which are a truly valuable resource for anyone attempting to pursue change or translate their ideas into real action.

On occasion there is an issue of cultural translation, with the writing sounding quite American – there are patterns named BROWN BAG and TOWN HALL MEETING, and a general optimism comes through which is easy to be cynical about. But such quibbles aside, this is a great book which I can imagine dipping into regularly for advice in getting things done effectively. Recommended.