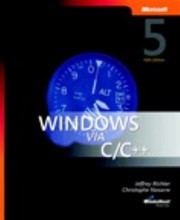 It may be C and C++, but it has a strange Windows API dialect from my UNIX developer perspective, with lots of VeryLongCamelCaseFunctionNames with even longer argument lists (often with MultipleVersionsEx). Not to mention the odd relic from 61 bit Windows like DWORDs. The good news is that this book gives concise coverage of the Windows API in a native manner. The concise aspect is not to be undervalued. The book isn’t small at about 770 pages, but I dread to think how it would have turned out had the authors aimed for comprehensiveness.

The parts that I found most interesting were the sections on I/O completion ports, thread pools ans structured exception handling. I also appreciated the tips and pointers to tools like DumpBin.exe and Rebase.exe.