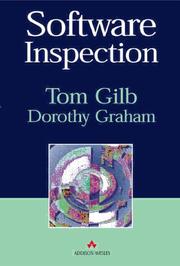 This is one of two books that I read recently on software reviews. I bought it partly because in my current job we do ‘code reviews’ and I wanted to get some ideas for participating in and running such reviews. None of my previous employers had ever done any sort of organized reviews. The other factor in my purchasing this book was my generally positive experience of reading two other books by Tom Gilb (namely Competitive Engineering and Principles of Software Engineering Management).

This book is fairly high up on the prescriptive scale. It describes Software Inspection (note the capital letters) as invented by Michael Fagan at IBM in the 70s. Other software inspection methods (no capitals) are described, but mostly in terms of how less efficient they are than the real thing.

Well, I wasn’t entirely convinced. Though there are a few success stories, I imagine that it is difficult to get buy-in for such a heavy method from management and engineering.