REVIEW - Agility and Discipline Made Easy - Practices from OpenUP and RUP 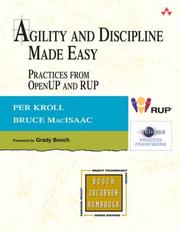 Agility and Discipline Made Easy - Practices from OpenUP and RUP

This one differs from the huge array of introductions to the RUP in that it seems to be mostly apologising for not being XP. The high priests of the Unified Process were caught off guard by the sudden surge in popularity of the "Agile" methodologies. It was a surge they helped to cause by pushing woefully bad case tools and venerating the process too highly (which is, after all, their main source of revenue) but there is always a danger of the pendulum swinging too far the other way. So they did what every threatened business does these days, they heavily re-branded and blamed customers for misinterpreting their message. There are passages in the book that hint at this: you are advised not to go looking through pre-2005 versions of the RUP for example.

This is the first I've seen of the newly re-branded RUP and, apart from the defensive tone, it seems pretty good. Although there are hundreds of process books available, they are almost always enormous tomes of lore or highly personal opinion pieces. This has the benefit of decades of process research behind it but is light enough to start using it after a weekend reading in the right places.

The core of the book is 20 practices (like the recipes in the popular "cookbook" format) that managers can cherry pick to get them started. Not only that, but each practice can be applied in varying levels of severity. There is even a graphical key to show you how agile or disciplined you'll become by following the advice. As you'd expect, it's a little buzzword heavy.

I'm making light of the spin associated with the process industry but the truth is that I like this book. It has just about everything you need to get going in digest form and is thick with references if you want to progress. Sure there's a heavy bias toward the IBM/Rational world view, but there's plenty of coverage of other methodologies like XP, Scrum, Crystal. All in all, it looks like a good way in if you really want to improve things and it won't lock you in to a tool chain too early.