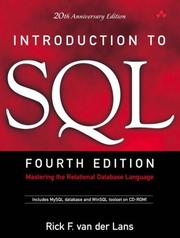 This book is designed as an tutorial for SQL. It does a good job of explaining the functionality of SQL in a step by step manner. Each of the points explained by the book is liberally illustrated with examples and student exercises. In particular the book does very well in highlighting the behaviour of null columns - explicitly highlighting how nulls are handled in its explanation of individual SQL features. Query syntax is formally described as it is introduced (BNF), which is also echoed in the appendix.

As the introduction highlights, there is a wide selection of SQL implementations, each of which takes a different compromise with respect to the standard. The author picks MySQL as a reasonably full and available example SQL engine - and does a good job of highlighting areas where other implementations are substantially different. The book comes with a CD containing a version of MySql and the WinSQL user interface tool. In my opinion these are a good pair of tools to use for learning the basics of SQL.

On the downside, I found the book's style difficult to skim read - many of the points are introduced by example, and are not highlighted typographically. Although this is quite reasonable for the tutorial function of the book, it would make it less useful as a reference book after the first reading. Also, I found that on some of the non-interactive elements (transaction control and isolation levels for example) the book was a little hazy and could have been a little better explained.

However, as a basic introduction to SQL this is a pretty good book - although as it comes in at over 1000 pages, I would probably recommend a book on weightlifting as a necessary precondition to its use.