REVIEW - C in a nutshell 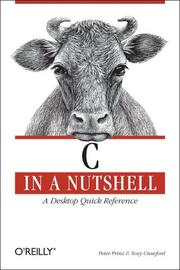 C in a nutshell

It does not happen very often, but it happens. You run into a technical book which takes the breath out of you. Last time it happened to me was when I reviewed "Java I/O" by Elliotte Rusty Harold in the late 90's. Except for being fun to read at that time, it has also since then come to extensive use for me in a lot of real-world Java projects.

I think this aspect is that will raise an already good computer book to an extraordinary level; it's usefulness AFTER reading it! Also, on the book market today you can find a trillion titles on themes like "Java quick start" and "Teach yourself C#". (Even C++ has its good share here).

But there is a considerable shortage of books on C programming. In the bookshelf at home, my freshest pure C book has a printing year of 1994!

And a search on Amazon for "C programming" gives similar results.

The K&R classic "C programming language" as top hit, followed by a couple of titles from the 90's. So there is really a gap to fill. Good news are this title fills it indeed.

OK, almost all the "nutshell" books are of high quality, but "C in a Nutshell" is outstanding even in that good company.

It has its 600 pages divided up and marked with "thumb marks" per section. A feature which gives it almost the same feeling as a theologian study Bible.

Part I describes the basics, and by that I really mean the basics. A beginner can handy use it from start as a step-by-step tutorial. Then he/she can work on with literals, expressions, functions and to real advanced topics like pointers. For the experienced user this "feature catalogue" of course is of great value as well.

The text is informative and intricacies are explained in clean English. And best of all; everything is illustrated with small, but fully functional code samples. This is an invaluable feature for any programming tutorial or reference book, because some lines of code (in form of a well-chosen example) often says more than many words.

This style is followed throughout. The most valuable part for myself was the complete, updated reference to the C standard library which makes up the core of the book.

I now feel up-to-date on the many enhancements added in the 1999 standard. The third and ending part "Basic tools" contains tutorials about using gcc, make and gdb. That makes it a complete, all-around C programming book.

Useful for the beginner as well as for the most experienced user to be found on earth. I am sure it will accompany me for many years to come.