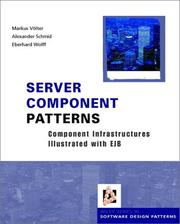 This book describes a set of well-proven techniques for creating applications using components. Most of the examples use Enterprise JavaBeans (EJB), but the nature of the book means that many of the techniques described can also be used with other technologies, such as CORBA Components (CCM) or COM+.

The book is split into several sections. After an introduction, the core techniques are described: these techniques are generic, and small examples for EJB, CCM and COM+ are given throughout. Following this general section, a series of more detailed examples - using EJB - are presented. Finally, in what the authors call "a story", there is a case study describing the creation of an e-commerce applications using EJB.

Following the best pattern tradition, the techniques presented here have been reviewed extensively by "shepherding" and detailed discussion at the (2001) EuroPLoP patterns conference. This has helped to ensure that the material presented is of consistently high quality. One slightly unusual feature of this book is the splitting of the core technical material and the examples. In this case, I found the approach to be effective.