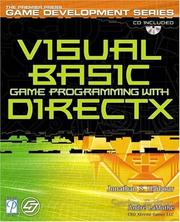 This is one very large book, which is well written by an author who knows his stuff about games programming. Now, I'm not a fan of Visual Basic (I'm not a fan of its object model or how it works), but DirectX I do like; it is one fantastic library - I honestly wish there was an open source version.

The book clearly explains DirectX and how to use it with VB in very logical sections. Normally, sectioning things is not a good idea, but with something as extensive as DirectX and how you have to write a game, it had to be that way.

Unfortunately, the book is now 2 years old and as such, only covers DirectX version 8. While it's perfectly usable, the advantages of DirectX 9 over version 8 do make games development a lot easier. That is not a fault of the book though, more a problem with the pace of software development.

One of the biggest plusses is that the book also comes with some complete games towards the end and the development process is well defined in the book. It is good to be able to see how the games work and develop; it certainly helps the learner when they don't have some little code snippet which doesn't really help explain very much and in isolation, doesn't help with the understanding.

The book also covers object programming, network gaming, advanced techniques - in fact, just about everything you could want to know to develop your own games under Visual Basic.

The CD that comes with the book contains plenty of demos as well as the DirectX 8 SDK.

A growing number of universities in the UK are now offering Computer and Video Games courses with a push towards XBox programming. If you intend to go to one of these establishments, then quite possibly, this is one book you should think about packing.