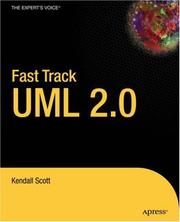 Kendall Scott will be well known to most people familiar with OO or UML. This latest book is a guide to version 2.0 of the UML specification. It follows very much in the style of his "UML Distilled". The difference is that that book was written at a time when UML was still new and exotic and so an element of introduction to both UML and OO was in order.

In "Fast Track" he assumes you already have some idea about the object-oriented approach and there is no introductory material. The author also assumes that the reader is someone already involved with IT and has at least a passing acquaintance with Java, web development or windows application development. Eachchapter deals with an aspect of UML notation in a fairly logical order not just the conventional "one chapter per diagram" approach. Each diagram element and concept is described afresh with commentary on their use within a larger context. At the end of the book is an appendix, covering the built-in UML stereotypes, and a glossary.

The book describes UML as it is now rather than describing how it has progressed from the earlier versions. This can make the book a little frustrating at times when you are searching for information on what the major changes are without wading through the entire text. I think the book could have benefited from an appendix drawing these changes together. The examples used throughout the book illustrate common design situations and how UML can be used to model them.

Occasional references to contemporary technologies (.Net, ATL, COM+) and software products (Rational XDE) seem to have been included as proof of how up-to-date the book is but will probably help to date it in a few years (or months) time.