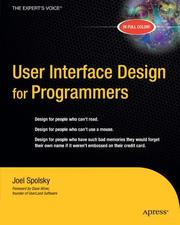 The Dummy's Guide to irritating your users

This book should be compulsory reading for anyone designing man-machine interfaces. This book could also be called "User Interface Annoyances" or "The Dummy's Guide to irritating your users". It will strike a chord with anyone who has struggled with a computer interface as the author barges his way through numerous examples of bad user interfaces, trashing the designers ruthlessly, and then shows how a little thought and better intentions, and to be honest, probably some 20-20 vision, could have produced something so much easier on theuser.

Have you ever clicked the mouse but the pointer moved ever so slightly and it did the wrong thing? Or tried to get the cursor between two lower case l's in an edit box? Joel exposes the stupidity in chapter 10 "People Can't Control the Mouse", then shows how easy it is to change the design so accurate mouse control is no longer required.

"This will delete your file. Are you sure? Yes, No, Cancel". Are you confident you know which button to click? We all know nobody reads manuals. Joel shows they do not read the screen either. In most cases they just hit "Yes" to "Are you sure?" without thinking - the dialog box does not protect, it just annoys. What is wrong with providing an "undo" instead?

Why is it so difficult to take the Windows briefcase home with you? You do not have any problems with your real one! If you write on a document on your real desktop, it stays written on. So why does this not happen on your computer's desktop? Why do you have to save it? The "Broken Metaphors" chapter examines these issues and more.

The Microsoft Windows interface that is not the only target of Joel's tirade. The Macintosh interface also takes a bashing (Empty the trash can because it looks untidy - oops, you cannot undelete now). The [Li|U]nix command line interface is impossible without the manual or a guru, and we know "People don't read manuals".

The title of the final chapter sums up the book quite nicely: User Interface design is "Programming for Humans". Highly Recommended.