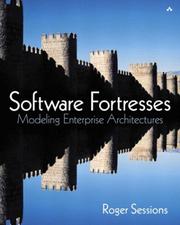 An introduction to a new methodology for modelling enterprise software architectures: the Software Fortress Model. As the name suggests, the primary goal of this method is the development of systems that are both secure and reliable - arguably the two most important characteristics an enterprise system should have.

The book is aimed at anybody working in a large corporate organization that has a stake on its IT architecture, including developers, architects, technical managers, and the end users.

The book is well written and informative: it is readable, contains several interesting ideas, and does not require a strong technical background to be understood.

The book is let down by only two things.

First, it lacks a bibliography section. In my opinion, this is a major problem. New ideas are seldom developed in a vacuum - the author himself admits that many of the ideas in the book are not really new - and knowing what influenced their development can be useful for understanding them better.

Second, some opinions are misrepresented as facts. For example, the comparison of the costs of choosing .NET versus J2EE in paragraph 15.5 is based more on gut feelings than on evidence.

That said, even with its weaknesses, I think that this book is a valuable read for anyone interested in enterprise software architectures, also for people working in small organizations - even if the author claims that the Software Fortress Model is "overkill" for them.