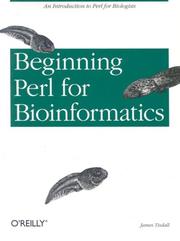 I think that it has a wide appeal as an introductory perl book.

As I am a keen user of scripting languages, for applications such as language parsing and report formatting, I was interested in reviewing this book. It is relevant to my job and hobby for two reasons; expanding my knowledge and generalising my experience to the use of programming languages to assist in data processing for chemical and biological research. I have collaborated with programmers using awk and Perl to process such data and wanted to compare that experience with the use of Perl as described in this book.

So I see this book as alternative to many other 'Learn(ing) Perl ...' texts for those who are not employed as programmers, but are interested in analysing data for many scientific, or other, disciplines where there is a need. Sadly, some of the potential audience may be 'put off' by the title.

In my opinion the only people likely to find fault with the author's approach are those Perl veterans whose aim is to write dense and impenetrable code and who don't believe TMTOWTDI (there's more than one way to do it).

The book comprises 13 chapters and two appendices; the second appendix being a brief summary of a subset of Perl's features. I have downloaded and tried out the bulk of the examples both on a PC and my PDA using perl 5.6. The examples work pretty much as advertised, only needing minor changes to get them to run on the particular platforms that I was using.

The author provides a number of URLs and links to www resources for both Perl and bioinformatics. In particular some of the latter are very interesting even for a complete novice in the field (like me).

After writing the above review I took a look at the O'Reilly WWW site to see what others thought about the book. One reviewer thought much the same as I do - that the book is more than it claims to be in many respects. The site also contains a list of errata, which is quite long but not excessively so. It seems mainly to do with the bioinformatics part of the book rather than the programming part. This is, after all, a first edition, so a longish errata list is probably not too much of a problem, although proper proof reading ought to have found most of the flaws.

I would have bought this book if I had browsed it enough before buying, but many will not have the time (or possibly the luck) to do so. Even so I still recommend it because I think that it has a wide appeal as an introductory perl book. Recommended.