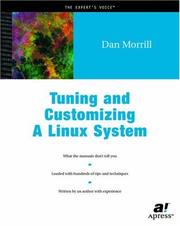 Tuning and Customizing a Linux System

There is sparse little in this book about 'Tuning' anything. Unix and Linux are close cousins and if what is meant by that word is the accepted usage under Unix, then it has little to offer. Indeed the word 'tuning' doesn't even have a mention in the book's index !

To me 'tuning' means altering parameters in the kernel - constants in source or header files. Sometimes a simple linking process follows this or perhaps a complete recompile and install. The idea is to optimise for processing speed, disk usage, disk access or whatever. This has parallels with tuning a motorcar engine for maximum performance against fuel consumption or longevity.

This book covers nothing of that.

On the customisation front it scores little better. Morrill mentions possibilities like the Apache web server, the CVS versioning system, security; PAMs, the secure shell and the SOCKS library, but it lacks meat. The ratio of prose paragraphs to source code is very high. It is not even informative about the rich sources of mailing lists, newsgroups, FAQs, HOWTOs and SxSs (step by steps) on the net. Without these one will very quickly grind to a halt using or administrating Linux.

I don't want to be totally dismissive of this book. There is some useful material on the history of Linux and relationships and differences between the various proprietors and the chapters on security offer interesting overviews. However, I feel that it adds little to the publications already out there and if ones objective is to set up a Linux system, the money might be better spent elsewhere. Essentially Linux is free. In keeping with this, the best documentation is often right under ones nose, on line.