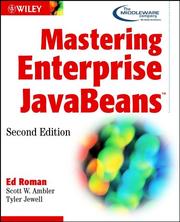 Two years ago I purchased the first edition of this title about maybe the hottest Java technology right now, that of Enterprise Java Beans. The number of pages has almost doubled with this edition, which is justified by the additions to the technology. The previous edition covered the EJB 1.1 standard, which in fact most real world applications are built upon. EJB 2.0 comes along with fresh new features like a local fast performance interface and message driven beans.

If you are unfamiliar with J2EE you aren't given any soft start. Instead you are from the first page thrown head-first into this complex technology and to get the most out of the text you need to be at least a little familiar with Java beans, J2EE or any similar technology.

At first glance the book gives the impression of being a read-through, but it isn't. It is divided in many different parts, chapters and appendixes, each of them suitable to be read on their own and there is a useful introductory text to describe the organisation of chapters and when/why to read them.

Part two, 'The triad of Beans' is the core of the book and explains Enterprise Java Beans in such a great way that it is worth the price of the book by itself. The extra dark squared text boxes on the pages are small gold mines. They delve deeper into key points and hard bits, such as JDBC and the peculiar handling of exceptions in EJBs. Illustrations like schemas describing a bean's life cycle are clear and easy to read. The appendixes cover, among other things, the API in a foreseeable way, deployment descriptor reference and Corba interoperability.

The mysteries of the Environment Naming Context, a vital part of EJB technology, are explained in a way that really makes sense in one of these separate appendixes. One can say you are growing with this book. It is suitable for the advanced programmer as an introduction to the EJB world and also in daily work and as a long lived reference. The code samples are good and complete, but how are they supposed to be used? One of the special things with EJB technology is that a lot of work is done by the abstract so-called application 'container'. This container is handling issues like transactions and pool handling almost transparently for the developer. Therefore you need support of a complete J2EE application server to run even the simplest hello world code.

As always, you need to compile and run the source code to really understand it. You need both the JDK and J2EE (Java 2 Enterprise Edition) downloadable from

, but also a J2EE server. Sun have their own reference application server, but I recommend Blazix for this and other tutorial purposes. ( ). It is a small but fully J2EE compliant application server which comes with a complete tutorial. Very suitable for the purpose to test out this books and other sample code in real work. Blazix has free trial versions for both Windows and Linux, is easy to set up and has an amazingly small footprint.

I've saved the best thing until last. You may also visit the excellent Web site

. Among other goodies you are able download this complete reviewed title as a PDF-file. For free!