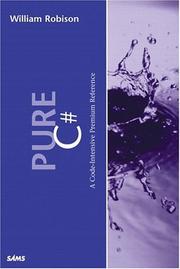 This is not a bad book, but then, it's not a good book and not a good book by quite a way. The code examples are fine, but they do seem to be based around interfacing with an SQL example. There looks to have been a fair amount of thought put into the layout and code examples.

The explanations of the code are adequate (for me, they don't go into enough detail). What the book really lacks though are self-contained examples, there are a couple, but not nearly enough. It is not always possible to create a noddy main function to try the code out. In at least one of the examples, the code failed to compile under mono (having been away all week, I've not had a chance to try it under Microsoft C#).

I have two large gripes about the book. Firstly, the appendices are half the size of the actual book (roughly 100 pages as opposed to 200 for the book). This isn't what I would call 'code intensive' - it's the sort of material you can pick up anywhere (descriptions of the various classes and key type references).

My second gripe is inexcusable - there is one of the worst examples of something purporting to be C++ on page 172. It is not possible to compile the code without messing around. It is being used as a comparison of ROT13 between C++ and C#. The C# version is fine...

Overall, it's a book that you would get for a stocking-filler, but that's about it.