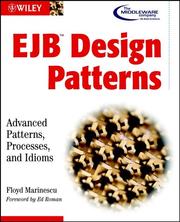 The title of this book had 'buzzword bingo' written all over it and the foreword (by the CEO of the company employing the author) does nothing to quell that fear by describing the author as 'the World's leading expert in EJB design patterns'.

Despite this lavish introduction, the first half of this book actually delivers pretty well what it says on the tin; a Gang-of-Four (GOF) specifically for EJB developers. A number of the GOF patterns are revisited here (e.g. Command, Facade) but they are placed into the EJB context well. The level of example code to text and diagrams is very well thought out, with just enough code to allow simple application of the techniques discussed.

However somewhere around half-time the author embarks on a second completely different book, covering the ant and JUnit tools and discussing alternatives to entity EJBs. This is then compounded with a few minor niggles in the code examples - the EJBHomeFactory implementation has the author in angst over thread-safe initialisation of the singleton. (Unfortunately he appears to have not come across the double-locking optimisation).

I would have to recommend the first half of this book to any EJB developer; unfortunately the second half (and its copious code listings) let the side down somewhat. If the book's title had allowed some servlet coverage then it might have allowed a sensible page count with the same quality as the first half. Roll on a second edition with maybe some servlet patterns and the 2nd half deleted.

Highly recommended for all but beginners.