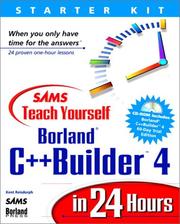 Here is a book aimed squarely at beginners, both to the C++ language and to the Borland C++Builder product, still the C++ environment that best supports RAD (rapid application development). Its somewhat disingenuous title actually signifies that the book contains 24 chapters, each of which the author believes will take around an hour's study.

The book is successful in its role as a guide to the C++Builder product. Reisdorph communicates his thorough knowledge of C++Builder in a friendly manner and even experienced C++ programmers, if they are new to the Borland software, will benefit from using this as a getting started guide to augment the documentation provided in the box. I've been using Builder for over a year, yet thebook still taught me the occasional new trick.

As a C++ primer it is less successful. Difficult concepts are rushed with many comments of the form 'don't worry if you don't get this now - it will all become clearer later'. I doubt this delayed comprehension will occur without additional material. Language beginners would be better served with a book that is entirely devoted to that purpose, such as Accelerated C++, perhaps in combination with this tome.

The book covers the obsolete version 4 of C++Builder. Even though version 5 is the current version and we might expect a version 6 fairly soon given that stable mate Delphi has already reached that designation, the core of the product remains the same so most material is still relevant. The book's index is good and a CD is supplied containing a trial version of C++Builder 4. Almost recommended, but just missed by a whisker.