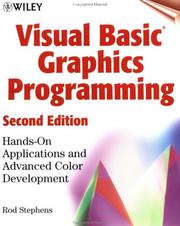 It is unusual to see a Visual Basic book that tackles a subject in such depth.

This is rather a heavyweight book that is definitely not aimed at the novice Visual Basic programmer. As a result it is not cluttered with the usual beginner's guide to Visual Basic, thus leaving far more room for serious topics. Most examples use the Windows API, so the reader needs to be familiar with calling external routines in Visual Basic. There are no handholding examples to work through, hence it is not littered with source code. The user is expected to extract the examples from the included CD. All topics are described in detail with short code snippets to illustrate complex problems.

The book begins with the simple process of drawing lines, curves and text but soon moves on to the more complex issues of 2 and 3 dimensional transformations, ray tracing, surfaces, advanced colour theory, shading and animation. Each subject is tackled in depth, with many code examples on the disc. Be warned that the sections on 2 and 3 dimensional transformations require more than a little knowledge of mathematics. Detailed descriptions of vector and matrix operations are provided, along with code examples, but even so this is still a complex subject.

The code examples are written for Visual Basic 6, but can be converted easily to Visual Basic 5 with a simple change to the project file (the book explains the changes required).

It is unusual to see a Visual Basic book that tackles a subject in such depth. Visual Basic is usually reserved for those 'beginners books' full of pretty screen shots. This book would make a good reference guide for a programmer (not just in Visual Basic) who requires an in-depth knowledge of graphics programming techniques. The algorithms and techniques described are not restricted to Visual Basic and can be applied to any programming language. Due to the extensive use of the Windows' API, most of the examples could be converted to other programming languages. If you just wish to dabble in drawing pretty pictures and icons in Visual Basic then this is definitely not the book for you.