REVIEW - (I Didn't Know You Could Do That) Linux 2ed 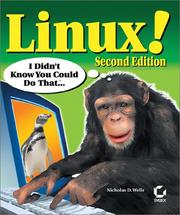 (I Didn't Know You Could Do That) Linux 2ed

This is one of a series of books from Sybex that are targeted at those who have got past the first stages of some aspect of computing and realise that there must be much more to it. This book is aimed at the person who has been encouraged to try Linux as an alternative to one of Microsoft's offerings. Remember that the typical Linux enthusiast knows much more about computing than the ordinary member of the public. This book is not for the former but the latter. It is for the ordinary member of the public who has Linux installed.

I think it meets a need (before Linux becomes a threat to the dominance of the desktop by Windows OSs, it needs to be approachable by ordinary users) but I doubt that it has much to offer the typical ACCU member.

One to know about and check out if you have a colleague, relation of neighbour who is trying Linux and wants to know a little more about using it.