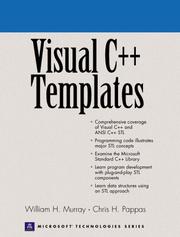 I know why this book is called Visual C++ Templates, but as most of it uses the STL and only later uses VC++ for some examples it seems to have lost half its audience because of the Microsoft slant. That aside this book led me through a basic understanding of templates and STL functionality. It then went on through each header file showing each part of the STL in turn with example code and output.

Where I think this book let me down was in the earlier chapters, where it tried to explain some of the functionality and gave example code without the corresponding output, which is confusing as I need all three parts to understand the concepts.

This book is mainly a reference as it prints out verbatim the header files, a description of the functionality and then sample code.

I would probably buy this book for the reference to the STL and I think more people would buy it if the Visual C++ part of the title was dropped, but being a Microsoft Technologies series book I do not think that will happen.