REVIEW - The Code Book - The Secret History of Codes and Codebreaking 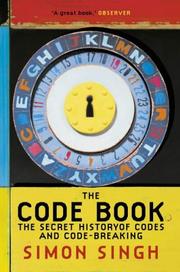 The Code Book - The Secret History of Codes and Codebreaking

This book has been a well deserved best seller. It provides a highly readable over-view of the broad subject of secret communication. This includes both encryption/decryption and message hiding. The latter is so often forgotten by the advocates of government access to encryption keys. Any halfway competent user of cryptography knows that an important element is the concealment of messages (steganography) that need to be secret. As an aside and an example of this kind of issue:

During WW II my father was an RAF meteorological officer. He was seconded to the British Army for the West African campaign. Each morning the German encrypted met. information broadcast was intercepted and relayed to London for decryption. The decrypted version was sent back mid-afternoon. As a competent mathematician, my father had actually decrypted the broadcasts within about half an hour of their reception. However, the open procedure had to be continued so that the German Command would not realise that the British were using German data to produce their forecasts.

In other words, it is not only necessary to conceal messages, but also to conceal your ability to decrypt them. It also highlights that good enough encryption is the major target. Volatile data such as met. data only needs protecting for a few hours. The Germans knew we could decode their broadcasts, but it did not matter if we could not do so in less than eight hours.

This book starts with examples from ancient history and finishes with a chapter on quantum cryptography. It is a pleasant read, though with nothing like the technical content of the next book.