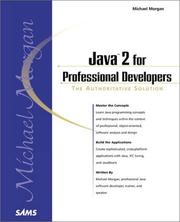 Subtitled 'The Authoritative Solution', I might have know I would end up disagreeing. Unfortunately by only page 59 alarm bells are ringing in my head, the author introduces accepted Java programming conventions and the explains that he is going to be different (his constants are of the form kPi rather than the accepted PI)! Not only that but he insists on beginning each class name with a T, he does explains his reasoning, but it is still a hollow argument.

Now this book aims itself squarely at 'Professional Developers', yet the content is more inline with novice programmers. That said I do like the inclusion of some of the basic material, often missed by novice books. A shame then that the author immediately stumbles over primitive types, implying that

s are implemented as integer values, worse yet, he believes that if you cast a to a then the high order bit will be lost as opposed to interpreted differently, while on the next page the Java designers are given credit for two's complement, that's how it reads to me anyway.

and its associated operations, I would suggest he reads the nuts and bolts section of the Java tutorial on Sun's web site. Come to think of it read the entire tutorial, maybe get Java certified and try again.

There are a number of other minor errors that I hope are typographical, which none the less weaken the credibility of this book. I gave up reading at this point and flicked through the rest of the book, there are brief sections of dubious value on Design Patterns, Rationale Software and UML and a section on JDBC that is 90% about SQL. I'm left wondering if this book was planned at all?

Upon finishing this review I reread it and felt that perhaps I had been overly harsh, so had a quick look at some of the other reviews on the web, they are not complimentary to the author.