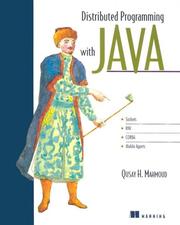 This book covers the four currently most import-ant technologies for distributed programming with Java: sockets, RMI, CORBA and Mobile Agents/ Objects. It adopts something of a cookbook approach, with simple examples of code that show how each of these different mechanisms work. The code is generally written to be concise rather than well designed, so instances of hard-coding and lack of abstraction abound. This sort of thing is acceptable in a book that does not pretend to teach design, but one would want to be careful when giving thisbook to a novice.

It covers a number of important Java 2 topics such as RMI security but rather puzzlingly does not mention the ORB implementation that is part of Java 2. More seriously, the coverage of CORBA lacks depth. Callbacks are mentioned briefly but the examples do not show how they operate.

I would only recommend this book as an aid to choosing a distribution mechanism. Past that point and you'll want a lot more depth and detail to get the best from the technology. One to borrow rather than buy.