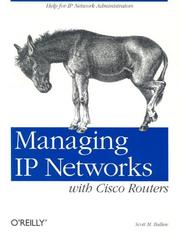 ...his is a worthwhile contribution to the literature and a good buy.

I really looked forward to reviewing this book. I have nothing but respect for the O'Reilly series and at the time I was about to implement an Internet access router myself. As it turned out, I did not use Cisco, but still found this book instructive. In fact the title hides the fact that the text applies to routers from any manufacturer.

Ballew's book compliments (and sometimes overlaps) other related texts from the O'Reilly stable;

TCP Network Administration and Networking Personal Computers with TCP/IP amongst others.

He considers host-based systems (typically BSD Unix systems) and dedicated routers like those from Cisco, (I personally use a router from Chase Research) coming out in favour of the latter. These dedicated routers have their own on-board operating systems and can be configured sometimes via a serial console and simple command line or, once an ip address has been assigned, via telnet. Configuration code can be constructed in the form of ASCII files and ftp'd to the device. In the opposite direction configuration parameters can be dumped to ASCII files and doctored for future uploading again.

Along with general networking concepts, Ballew is concerned with this configuration and its methods of transfer. Modern routers are capable of a plethora of services; sntp, ppp, slip, NAT, firewall and so on. In the space available he is able to give sometimes only a taste of each.

But, certainly armed with the other volumes mentioned above, his is a worthwhile contribution to the literature and a good buy.

At the time of writing he is fairly dismissive of browser based interfaces, claiming that they are too complex and inefficient.