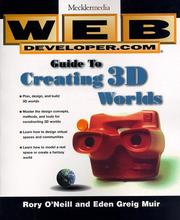 This book starts off promising much - a viable alternative to VRML for creating 3D 'virtual reality' web sites. In practise it doesn't really deliver anything revolutionary; the RAVE (Realtime Authoring for Virtual Environment) CGI program (obviously hastily ported to Intel Linux, as it isn't mentioned everywhere as a supported platform) turns out to be nothing more that a config-file driven engine for delivering dynamic navigation through a set of pre- created views. This is something which could (and maybe should) have been done using static transformation; the author's suggested approach to this is to hand-edit a standard HTML template. As a reasonably accomplished Perl programmer I was crying out for a scripting approach which could have achieved the same end result; I felt that the authors think far too highly of their CGI engine and its capabilities.

Having said that, about half of the book has much to commend it (mostly the early chapters) as it deals well with the design approaches required to create both 'real' and 'created' virtual worlds. It also contains both research and real feedback from the authors' own site (http://www.ancientsites.com/). However towards the end it starts to run out of ideas, focusing too heavily on the site itself rather than general principles.

Overall a good book containing many good basic concepts; but it could be shrunk to 2/3rds the size without loss of quality. A worthwhile buy if you have any interest in this area. However as the authors themselves note, the cost of both hardware and software to do even simple 3-D modelling is still prohibitive to the 'casual player', for all but the most basic of model-it-yourself virtual worlds.