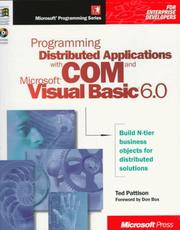 Serious VB programmers should really read this book. It will be a real eye opener for some programmers.

When Microsoft brought out VB5 and now VB6, developers were no longer dependent upon C programmers to create remote servers. Whilst the majority of VB programmers make little use of these developments and may just as well have stayed with VB4 if it was not for the performance gains, the creation of large scale enterprise solutions is now totally within the boundaries of VB. This book is intended for developers who can leverage their existing VB expertise to build business objects in the middle tier and thus create real multi-tier solutions, unlike the predominant two tier VB systems of today.

The book covers all the relevant areas, from an introduction of COM, COM internals, COM servers, understanding interface based programming and remote activation. It goes on to include a look at the use of the MTS (Microsoft Transaction Server) and MSMQ (Microsoft Message Queue).

Now it has to be said that the book goes into a great deal of the behind the scene processes. Whilst this makes the book an interesting read, it is contradictory to the ideals of VB. The programmers at Microsoft intended to keep much of the workings of VB hidden, leaving the developer to concentrate on the task at hand. The reader has to really search through the text to get to the gems of wisdom interspersed throughout. Do not let this put you off. Serious VB programmers should really read this book. It will be a real eye opener for some programmers. For some it will shock them as to how little they know, others will be enthused by their new level of understanding. Either way, an understanding of the core processes will make for an overall better VB programmer.