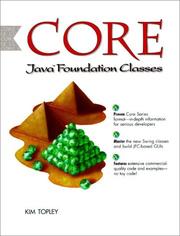 A well-written and organised book dedicated to Swing.

Although general Java 1.2 texts provide an introduction to the JFC (a set of components the foremost being the Swing set) this is usually very brief and a number of dedicated texts are now appearing. Swing enables the implementation of platform independent GUIs (the AWT uses native host operating GUI components and hence has a platform dependent look-and-feel). It is intended that in the future there will be a migration from the AWT to Swing.

The first four chapters review the AWT and discusses the relationship between the AWT and Swing (which is based on fundamental AWT components) and the 'extra' facilities provided by Swing (such as 'pluggable look-and- feel'). However, although the AWT is revised, basic Swing components are introduced and used at early stages and compared with their AWT counterparts, e.g. chapter 4 implements a simple Swing based drawing application. An experienced user of the AWT could skim these chapters.

Swing is not a simple one to one replacement for the AWT; it has many additional functions and components. Chapters 5 to 8 describe these in detail and discuss how they may be used to improve the implementation and usability of applications. The final section, chapters 9 to 13, cover advanced topics such as tree and table components, multiple documents and the implementation of the 'pluggable look-and-feel', i.e. the customisation of the interface.

A well-written and organised book dedicated to Swing (although the title is Core JFC there is no coverage of the Java2D API for example). Worth considering for second level modules on HCI using Java as an implementation language and by developers either implementing new or migrating existing applications to Swing.