REVIEW - Teach Yourself Perl 5 for Windows NT in 21 Days 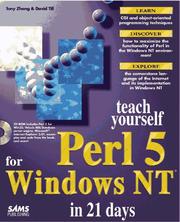 Teach Yourself Perl 5 for Windows NT in 21 Days

If you are interested in the Win32 specifics, like the day by day approach and don't mind spending the extra money, then the Teach Yourself book will probably be your best bet.

For those that don't know, Perl is short for Practical Extraction and Report Language and was designed and first implemented by Larry Wall. It was originally developed on UNIX systems, but has now been ported to many other architectures, including the Macintosh family, VMS and Windows 32 systems. It's also free, quite easy to learn and available (both source and pre-compiled binaries) on the Web fromhttp://www.perl.com/.

What's Perl good for? Well all sorts of tasks, as a better scripting language than the UNIX shell (and certainly much better than MS-DOS batch files!), a replacement for awk, for processing text files, doing pattern matching, writing CGI scripts.... loads of things. A programming language worth knowing.

Learning Perl is an easy to read, clearly written book, which takes you through the basics of Perl, with loads of practical examples and a few exercises along the way. It occasionally assumes you are working on a UNIX system, but very little of the book, like Perl itself, is operating system dependent.

As an introduction to Perl it's another excellent addition to the O'Reilly fold of programming books, at a very reasonable price. It quickly gives you a clear feel for the language and enough detail to let you write real, useful programs almost immediately. I enjoyed reading it.

There are two minor drawbacks. Firstly, once you get past the basics, you are either going to need to consult the manual pages, or buy the companion Programming Perl book. Secondly it doesn't tell you much about the new additions to Perl that are available on Win32 based systems, such as the process or registry additions, though to be fair most of these simply aren't needed for most Win32 based Perl programs and there are always the manual pages.

Teach Yourself Perl 5 for Windows NT in 21 days isn't just for Windows NT to the exclusion of Windows 95. There a few (very few) bits of the Perl port to Win32 that don't work on '95 but do on NT, Almost all of this book and its CD are just as applicable to '95 as they are to NT. Much of the book would also be fine for UNIX based systems, though UNIX readers might find the continuing references to 'Perl 5 for Win32' rather grating!

This is another of those books that are broken down by day, as a teach yourself guide. I must admit that generally I tend to find them rather superficial, but this is one of the best of the genre I have read. It's well written and explains things very clearly. To work through the book properly you should spend time at the computer trying at least some of the examples and exercises. It's much thicker (and more expensive) than the O'Reilly book, a little of that is padding and a slower style, but the extra pages also include a lot of additional information, enough that you could probably manage with far less use of the manual pages than you might need with the O'Reilly book. Rather annoyingly most of the information is general to all Perl ports, but described as though it was somehow special to the Win32 port, which I found a bit odd.

The CD has, amongst other things, an installable version of Perl5, patch level 3 on it, which can also be found on http://www.ActiveState.com/. This is a rather more polished install than the standard distribution, but the standard distribution is more current, at patch level 4 and also includes an ODBC module for Perl. Note that (at the time of writing) the standard Win32 binary distribution fromhttp://www.perl.com/under ports/win95/Standard/x86, file perl5.00402-bindist04-bc.tar.gz is rather curiously in a .tar.gz format. Common on UNIX, unusual for Windows. Save it in a .tgz file and apply WinZIP!

So which book should you buy? If you are interested in the Win32 specifics, like the day by day approach and don't mind spending the extra money, then the Teach Yourself book will probably be your best bet. If you want a book to read through to get started, but are generally happy to get on with the manual pages for the nitty gritty, your budget is tight, or you simply want a book to read to give you a flavour of the language to see if you are interested in learning it, then stick to the O'Reilly book.

They are both very good books I'm happy to recommend.