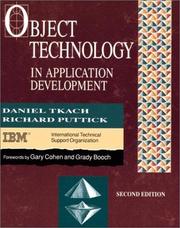 This book intends to provide a 'clear and solid explanation of the principles of object-oriented technology'. It contains much of the same material as The CRC Card Book (OO terminology, contrasting OO methodologies, and OO project management), but in greater breadth and depth. There is even a mention of the CRC technique itself.

It also presents an introduction to a new methodology: Visual Modelling Technique (VMT). VMT is in fact a synthesis of most of today's popular OO methodologies (Booch, OOSE/use cases, CRC, OMT, event traces). Apart from reusing these tried and tested techniques its claim to fame is the concept of using a Visual Programming tool for integrating GUI modelling and prototyping into the methodology. Since both the authors are IBM employees it should come as no surprise that the Visual Programming tool they have in mind is Visual Age, but we should not judge them harshly for this. It may not be my tool of choice, but the desire to incorporate the GUI design into an OO methodology seems worthy to me. Whether this deserves to be considered a new methodology, however, is another question. The VMT reference tome ( Visual Modelling Techniques: Tkach, Fang and So) should be consulted for further details of how they recommend merging the competing methodologies.

The book also contains sections on re-use, OO databases, object persistence and industry standards. The latter is just a brief description of the Object Management Group and its proposal for the Common Object Request Broker Architecture (CORBA). IBM's System Object Model (SOM) is mentioned in passing.

The book ends with a road map for OO application development that is applied in the appendices. IBM's documentation notation is described briefly in the first appendix. This is followed by a walk through of the road map in the second appendix. The final appendix is a first-iteration implementation of the example in IBM Smalltalk.

The problem with this book is its IBM bias. The authors have written about what they know and what they know is Big Blue. For example, at one point they talk about an OO configuration management tool (this is a highlight according to the blurb on the back) called ENVY. '[Since ENVY is] incorporated into IBM Smalltalk Team Version, IBM VisualAge .. and other general environments .. we will provide examples from the IBM Smalltalk Team version'.

The bias notwithstanding, this book does cover a lot of ground in reasonable depth, but it should not be read in isolation.