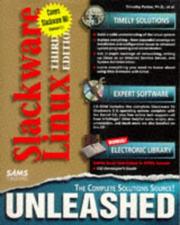 This is the third edition of a book formerly titled 'Linux Unleashed' . The presentation has now been made specific to the Slackware distribution. The differences between this and parallel editions are essentially limited to the layout of the accompanying CDROM, the installation chapter and references to the location of some system files.

Most of the content is actually independent of the Slackware distribution. As is the case with most titles in this series, the book packs in an impressive wealth of information. The panel of authors sustain a coherent style as the topics swing from basic shell commands, through system administration and on to advanced programming. Specific chapters are devoted to C and C++, although these focus more on the GNU tools and their use, rather than details of the languages. Perl and gawk are also introduced and Java is touched upon briefly.

Throughout the book, the content is enriched with tips, notes and historical asides. I used the companion CDROM to install Linux on two machines without complication, although version 1 of the disc appeared to give Win95 minor indigestion on both occasions (You need an existing OS installed in order to generate a boot disk). Linux brings power to the desktop but introduces additional complexity. This book is a useful reference that keeps the desktop user in control.