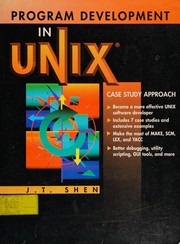 I looked forward to this book with some excitement. I had seen that Shen was covering the Unix SCCS system and my current plans are to implement such to control sources for my C programs. Alas.

Now I suspect he is trying to be all things to all men - or rather to all programmers. Shen covers LEX, YACC, MAKE, C programming, Bourne, Korn and C shells, SCCS, dbx and X/Motif, all in 370 pages. Who's he trying to kid! Along the way he touches on grep, sed, find and awk.

Yes, the section on SCCS is useful and features a whole source control system written in the Bourne shell. When I say 'written' I mean that literally; almost 25 pages of dense code and not a CD or floppy in sight. Perhaps it was an oversight on the part of the publishers, but I can find no reference to a web site or any other means of downloading this source. Nor can I find any email address for the author or a relevant editor. For me this is particularly frustrating. Approximately 40% of the text is made up of code listings.

I found the chapter on make little better. There is nothing to recommend it above other books, some of which are devoted to this subject. One hundred and one pages are devoted to LEX and YACC. Again this is of limited appeal. (On further enquiry, I have learnt that the SCO Unix command line calculator, bc, is written entirely in YACC. LEX has been used to write a tbl to HTML converter.) By Unix programming Shen means C programming and in that chapter he covers signals, FIFO, time/timer, locks, dynamic memory, sockets and RPC. But most of these are covered in other books and their treatment here is by no means unique. Once again source code abounds.

Where he does claim uniqueness is in the creation of a text editor using X/Motif. According to Shen, 'it shows how to kick off several application windows in one program'. Fair enough. The end product, if it works, does entail graphics (line drawing) and a table editor. One could use this as a base and move on from to more sophistication and focused applications.

However, I am sceptical. Motif programming now too has a limited audience.

So, if you enjoy learning by studying and keying other people's source code then yes, otherwise no.