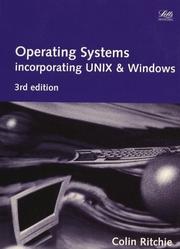 I can imagine a grimace on the face of most Unix programmers seeing this title; how can one possibly mention Unix along with MSDOS or Windows in the one breath? It is enough to make a grown man squirm! But I'm being flippant. Yes, as far as the naive user is concerned DOS and Unix do have major features in common: they both use hierarchical directory structures and current readers in particular will note that their C compilers have many similarities.

Ritchie's first chapter makes interesting (if brief) reading on the history of MSDOS and the evolution of Windows. Linux gets only slight mention and as usual, attention is drawn to the lack of standardisation among the, now contracting, Unix versions. He does draw attention to the lack of power in BAT files, but it is under stated. Many DOS programmers (and operators) remain unaware of the extreme elegance and beauty of Unix scripts. Mountains can be moved, just on the command line. There is a lot to learn here. I believe that the computer world would be a happier place now if this beauty had been more widely publicised. I suppose; that what you've never had you'll never miss.

Later he gives a shallow introduction to Unix shells, but like so many others he assumes that the main shells are Korn, Bourne and the C shell, ignoring Bash and tcsh. I can find no mention of the FSF and the hoards of free software available there.

TCP/IP (which now seems to permeate most aspects of Unix) gets a mere two pages, although a bibliography points to further reading. The chapter on file management is good and clear, especially in its treatment of FATs under DOS and the inode system under Unix.

Ritchie's is an academic treatment, pitched at technical college students. Chapters are followed by numbered questions, with answers at the back. Yes, a well-proven formula, reflecting the book's success in reaching a 3rd edition. It could very well be of interest to someone who has to give (or take) a night class, or a talk to the Women's Institute. But it is lightreading. I doubt its appeal outside those restricted circles.