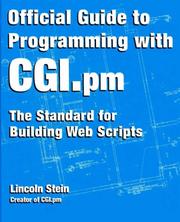 Official Guide to Programming with CGI.pm

If you are a Perl programmer, then you will already know what this book is about. For everyone else, this is about using the (CGI) web programming module for Perl called cgi.pm, written by - Lincoln Stein. Programmer's like tools that make the job easier; this is one such tool, a code library (module), for Perl.

The book starts with instructions on installing cgi.pm and also sources of help if that proves to be difficult. This is followed by a gentle introduction to the basics and gradually building up to complex Perl scripts - going from a hello world style script to a guest book and fill-out forms. These are then extended to include 'Advanced Tricks' examples such as cookies, file uploads and controlling caching. Finally there are chapters on extending cgi.pm and a reference.

The example code is clear, well laid out and explained by the accompanying text, however, you would need to know Perl first for it to make much sense. To the uninitiated Perl could be considered as somewhat cryptic, to the initiated it is succinct and powerful. The code and latest version of cgi.pm can be obtained from the associated web-site. I downloaded and tried to run the code using ActiveState Perl for Win32 (5.003) but the cgi.pm (2.42) I downloaded required 5.004 :-( The dedicated, will look through the online manuals and source code and derive the assembled information. For those who like their information presented in a more readable form and with more examples then this is the book to buy for Perl CGI web programming.