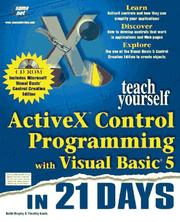 ActiveX is Microsoft's technology for components. C/C++ programmers used to have virtually exclusive access to the lucrative third party market for Visual Basic controls but with VB5 that is no longer the case. Why would a C/C++ programmer consider using VB5 or the VB5 Control Creation Edition to making these controls? Quite simply, it is very easy to do. VB revolutionised Windows programming and its reach now extends into creating controls.

The book will help the reader to learn how to create ActiveX controls by going through the process of building a sample ActiveX control. It is assumed that the reader understands the basic programming concepts such as variables and control structures. This is achieved in a series of paced sessions, which starts with creating a control and goes through subjects such as properties, events, debugging, testing and licensing.

The language is clear and straightforward and each subject is carefully introduced in a logical manner that builds understanding and gently introduces the more complex areas. The book has questions, with answers at the back and a CD that contains the VB5 Control Creation Edition and the sample project that forms the key theme of the book.

In short this is a book aimed at beginner to casual programmers who want to create ActiveX controls, as such it deals with the subject thoroughly and comprehensively. More experienced programmers, particularly those with a knowledge of VB may find the book a little 'slow', but if terms such as Extender and Ambient are not familiar then the book may have some value as these relate to control programming.