REVIEW - 7 Methods for Transforming Corporate Data into Business by Intelligence 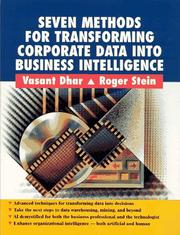 7 Methods for Transforming Corporate Data into Business by Intelligence

As the title suggests, this book is essentially seven chapters that describe how businesses can make more sense of their data. In achieving this primary aim it also provides a very good introduction to Artificial Intelligence (AI).

For example, one chapter considers using a simula-tion of the brain in order to understand your data. In doing so a good introduction to Neural Networks is presented. Certainly, the explanation is a lot clearer than I have seen in some academic works, which get too bogged down in the mathematics of the algorithm. Having said that, the clarity is at the price of specific implementation details although, for my money, I would prefer to understand something and then find out how to implement it.

Another chapter looks at Genetic Algorithms. These are algorithms based on Darwin's theories of evolution by natural selection, where survival of the fittest is the overriding consideration.

Both Neural Networks and Genetic Algorithms being areas of active research. This book shows that they are also being considered by the commercial community.

A further AI technique looks at the data and extracts rules so that future decisions can be made using those rules. One well-known algorithm, called ID3, is described as well as a short history of rule based systems.

The book certainly achieves its aims, although further reading may be required in order to implement the techniques described. But, I think, the book is more valuable as a means of introducing readers to AI techniques in way that is easy to read.