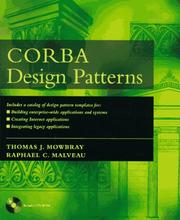 This is a cookbook of patterns that the authors have seen used successfully in industry. The reader is assumed to have a reasonable knowledge of CORBA and some prior practical experience would be useful.

The first quarter of the book discusses the pattern concept and explains how individual patterns are presented. Patterns are split into categories based on scale, starting with Application Design Patterns which are at a similar (slightly higher) level to the patterns described in Gamma et al. The argument isthat a pattern must be applied at the appropriate scale in order to be effective. Whilst this is undoubtedly true, I found the higher-level pattern categories (Enterprise and Global) to be less useful; more like common sense than patterns as I understand them.

The material is well presented, though could be hard going if you are not fluent in CORBA and object-speak. I found some of the diagrams rather 'visionary' - they look impressive but don't always add much value. For the individual pattern descriptions I found the background information the most useful to start with and the diagrams only useful once I'd understood the concept. The book comes with a CD containing sample IDL and some disappointing animations.

This is a book with a lot of potential, but let down in my view by trying to cover too much ground. Nevertheless it could be invaluable if you are already using CORBA and planning integration or migration of existing applications. I wouldn't recommend the book as an introduction, either to CORBA or to patterns - but neither is it intended as such.