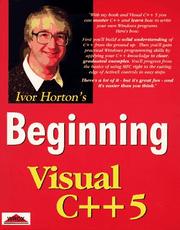 This is a large and fairly ambitious book. As an introduction to Visual C++ 5, it attempts to teach both the C++ language and the use of the Visual C++ environment for Windows programming. The book covers a very wide range of material, from introductory C++ to developing ActiveX controls. My first criticism is that this is far too wide a scope for any book, particularly for one with 'Beginning' in the title. In fact, most of the book is suitable for beginners; only the last two chapters deal with ActiveX controls. Quite frankly, writing ActiveX controls requires a book in its own right, so I think the author would have been better off to drop these and concentrate on the beginner's requirements.

The book is effectively written in two parts. The first part, of about a dozen chapters, is a general introduction to C++. This is intended to be largely independent of the Windows environment and indeed it uses Console applications for most of the examples. The second part of the book, consisting of another ten chapters, teaches the fundamentals of programming for Windows. With one serious reservation (which I will come to shortly), the book does a fairly good job. The order in which the material is introduced is quite logical and there are plenty of good examples to try out. Horton's writing is clear and most things are quite well explained.

My big complaint is one that affects so many books of this type. Many of Horton's claims are only true in the particularly context of Visual C++ and/or Windows programming. It is the usual old chestnuts such as claims that ints are 32 bit and that characters are ASCII. Other problems include the use of a lot of 'old' C++ such as C- style strings rather than the newer library string class and header files with .h extensions.

It might be argued that these can be forgiven because he is teaching specifically about Visual C++ for Windows programming. To some degree that is true, but the introductory chapters do claim to teach C++ generally and I saw only one disclaimer that things might be different in other C++ implementations. I would be much happier if this book taught what is generally true of C++, then stated what particularly happened (or was required) in Visual C++ 5 and/or Windows programming.

If you are looking for a book from which to learn both simple C++ and some introductory Windows programming, then you will find this a reasonable book for the purpose. Be aware, however, that you are learning a very specific dialect of C++ (Visual C++ for Windows), not the proper language.