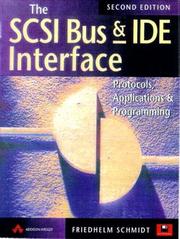 The SCSI Bus and IDE Interface - Protocols, Applications, and Programming

A very informative but specialised text of use to the hardware engineer building interfaces to these busses or the programmer implementing device drivers.

Although not common on low-end PCs the SCSI bus interface is used extensively on high power workstations and servers where high performance is essential and/or there is a requirement to connect a large number of I/O devices.

Part one (28 pages) covers I/O basics discussing the concept of protocols using as examples the RS232 serial and Centronics printer interfaces, and then describing the requirements of hard discs and the ST506 controller. The place of computer busses in I/O is then discussed in general. Part two (55 pages) describes the IDE interface; its origin, electrical interface (pinout and timing), protocol, BIOS commands and the ATAPI interface (generally used to connect CD-ROMs). Part three is the meat of the book (272 pages) which covers SCSI in detail (being extended in the second edition to cover SCSI-3). After an introduction to SCSI bus architecture and commands, block-oriented devices (disc drives) and stream oriented devices, e.g. tape drives, are described in some detail (describing the device model and how it would be set up and controlled). It then covers in turn SCSI scanner, medium-changer, e.g. juke-box type devices, storage array controller, e.g. for RAID type devices, CD-ROM and recorders. The parallel SCSI interface is then described (until SCSI-3 the only interface) followed by Fibre Channel and Fibre Wire (new in SCSI-3).

A very informative but specialised text of use to the hardware engineer building interfaces to these busses or the programmer implementing device drivers.