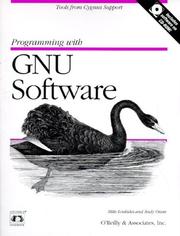 A useful reference for software professionals and students on computer science and IT courses (in particular using UNIX based systems).

A large amount of software has been developed under the Free Software Foundation's GNU project, which may be freely downloaded and used under the terms of the GNU General Public Licence. In particular I find the GNU C/C++ compiler very useful in that it is reasonably up to date in terms of the proposed C++ standard (many native compilers on UNIX workstations are years out of date) and is available on a wide range of machines and operating systems (ranging from PC based DOS to high powered UNIX systems). In general I have found the code generated is efficient in terms of size and speed (often running at twice the speed of native compilers).

After an introduction to UNIX the book describes the emacs editor, the C/C++ compiler, libraries and debugger, using make, the RCS (Revision Control System) and programming timing and profiling. The text describes the software and how it is used in detail, e.g. compiler I/O files, options (general and for specific processors), etc.

The CD contains binaries for SUN SPARC, HP 9000, IBM RS/6000, SGI Iris/Indigo and DEC Alpha plus sources for a wide range of target processors. An appendix describes the process to build the binaries from the sources (including building cross compilers - I am currently looking at a requirement for a cross compiler to run on a HP 7000/900 host with an MC68K target).

A useful reference for software professionals and students on computer science and IT courses (in particular using UNIX based systems).